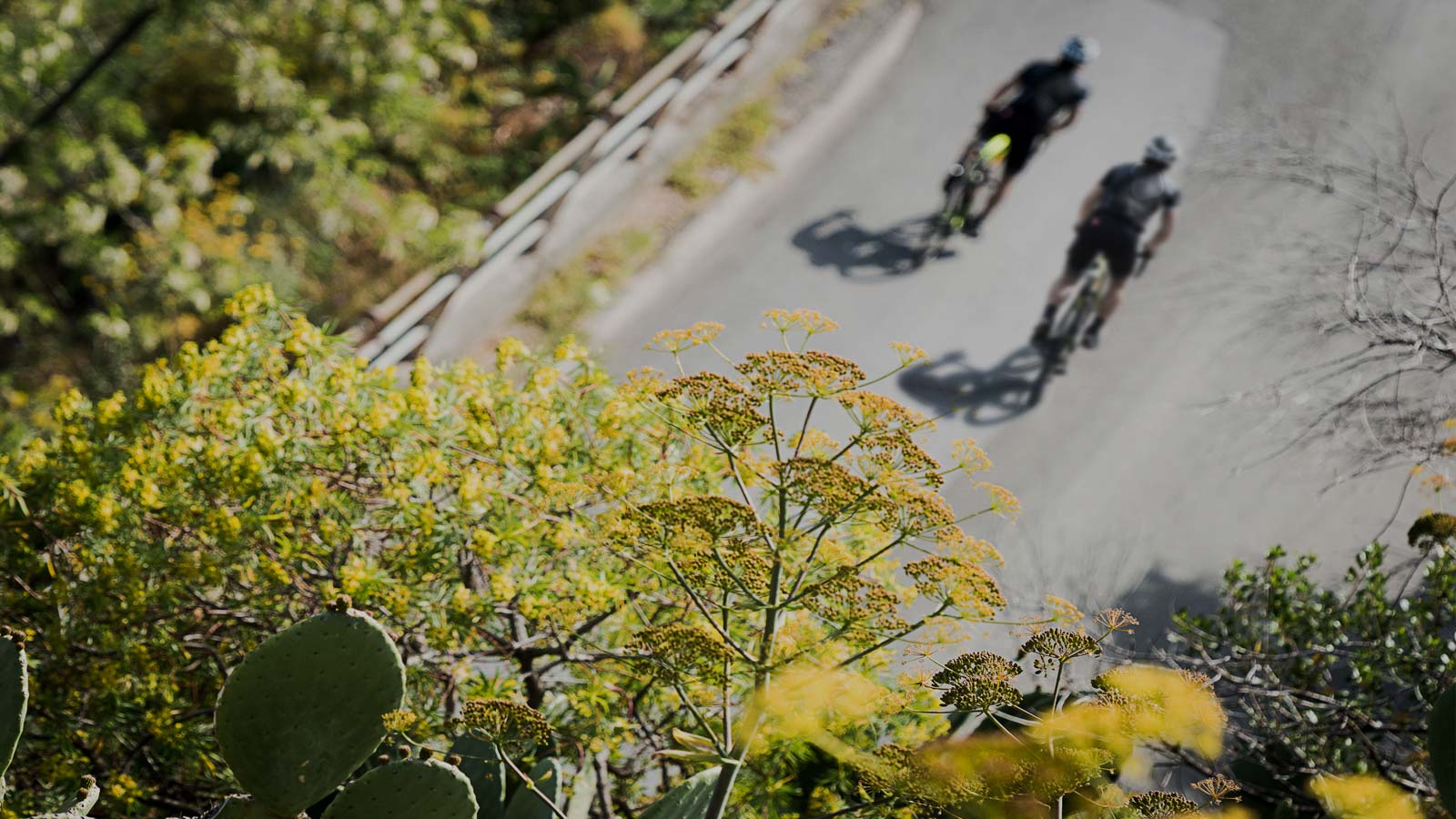 Thomas is ready to show you the roads of Sicily only locals and professional cyclists are lucky enough to ride. Thomas is a Danish racing cyclist with 20 years+ experience in guiding and training people. He has extensive knowlegde about Sicily. You name your type of ride and he will show you the best Sicily has to offer. With Black Road Cycling you will have a safe and enjoyable ride. Based on your input we help you to get the right course, distance, and height meters.

If you need to rent a bike, don’t worry, we have the right size bike for you . When you book a guiding you get 10% discount on the bike rental. 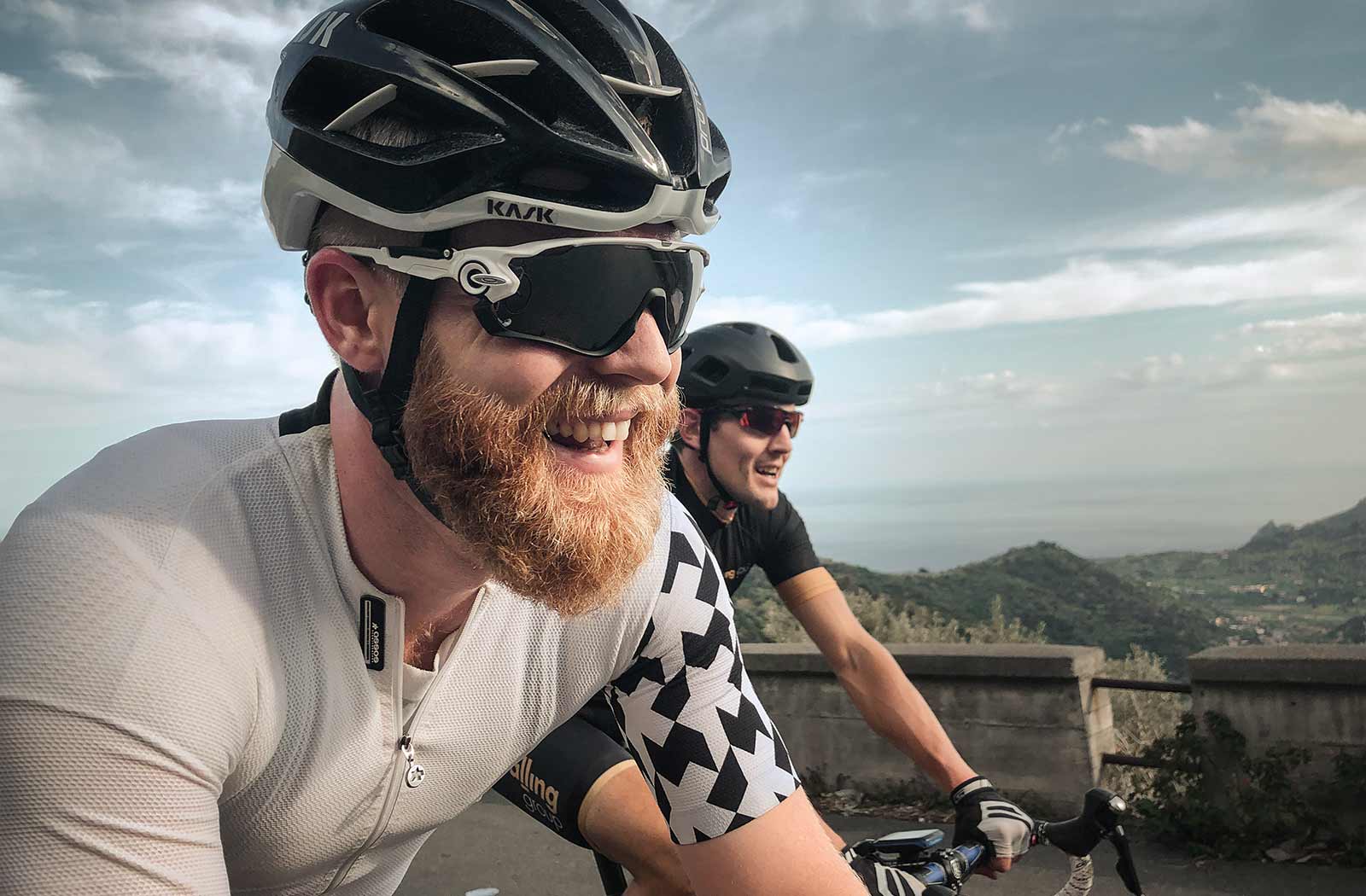 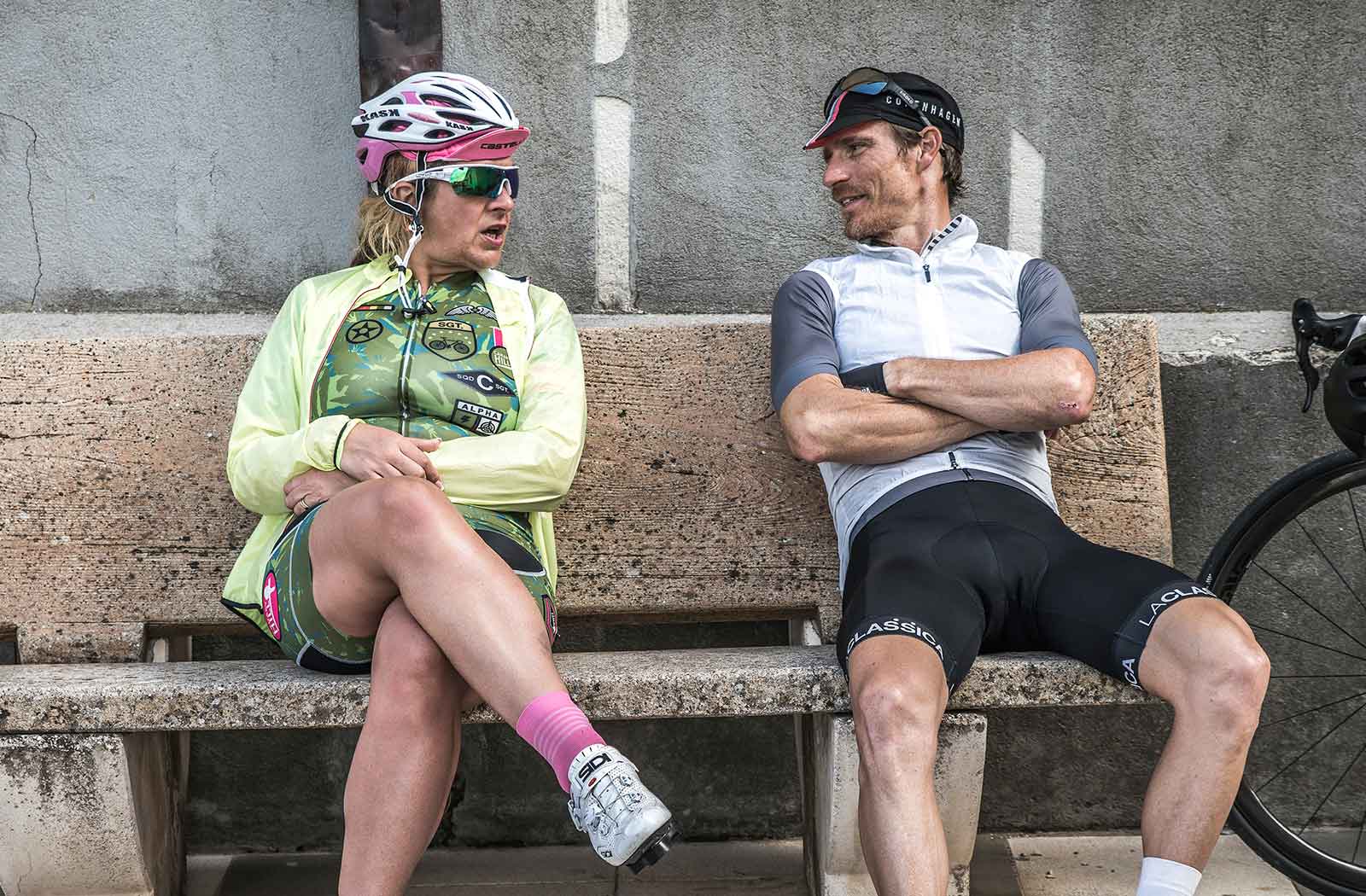 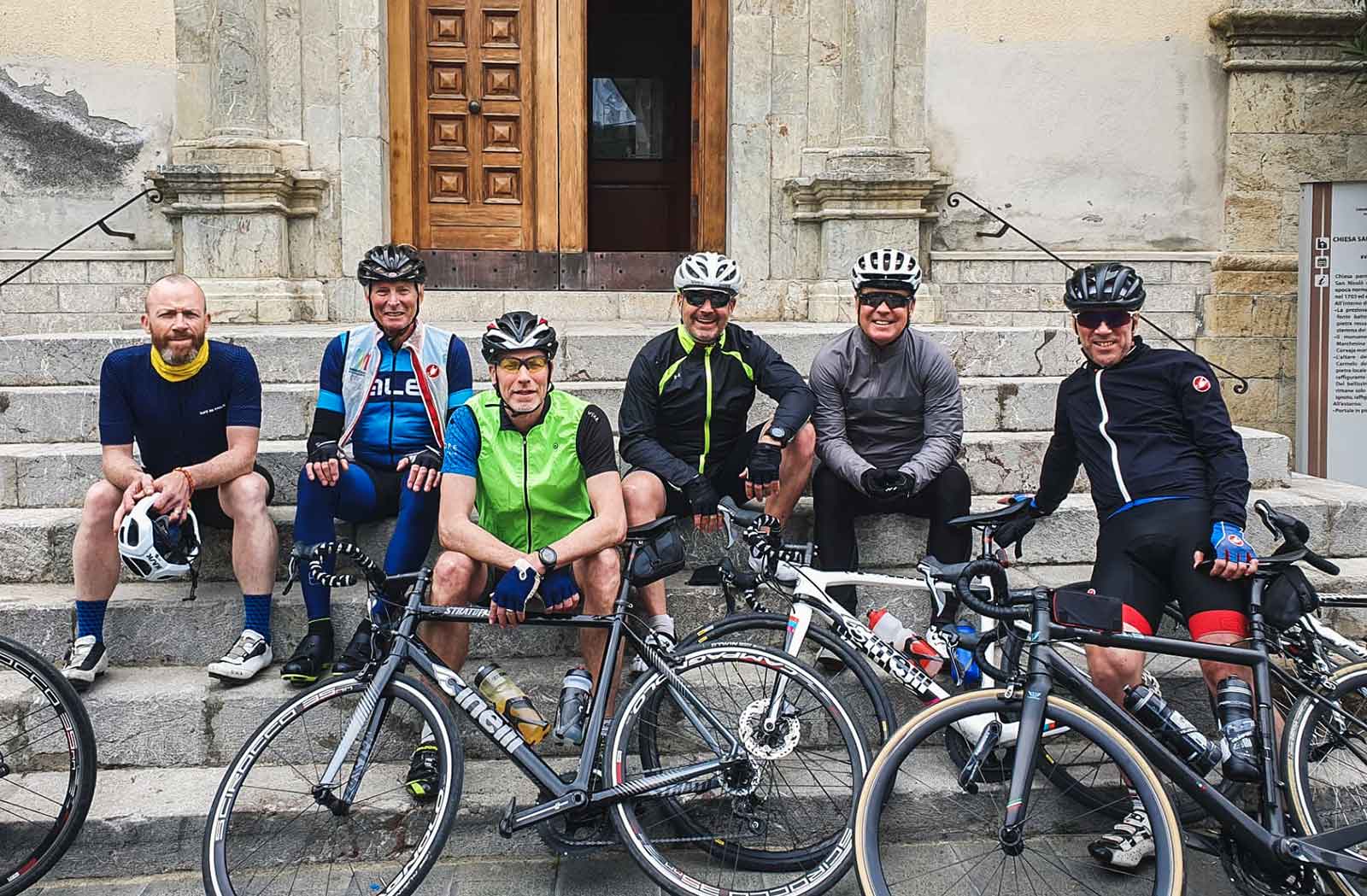 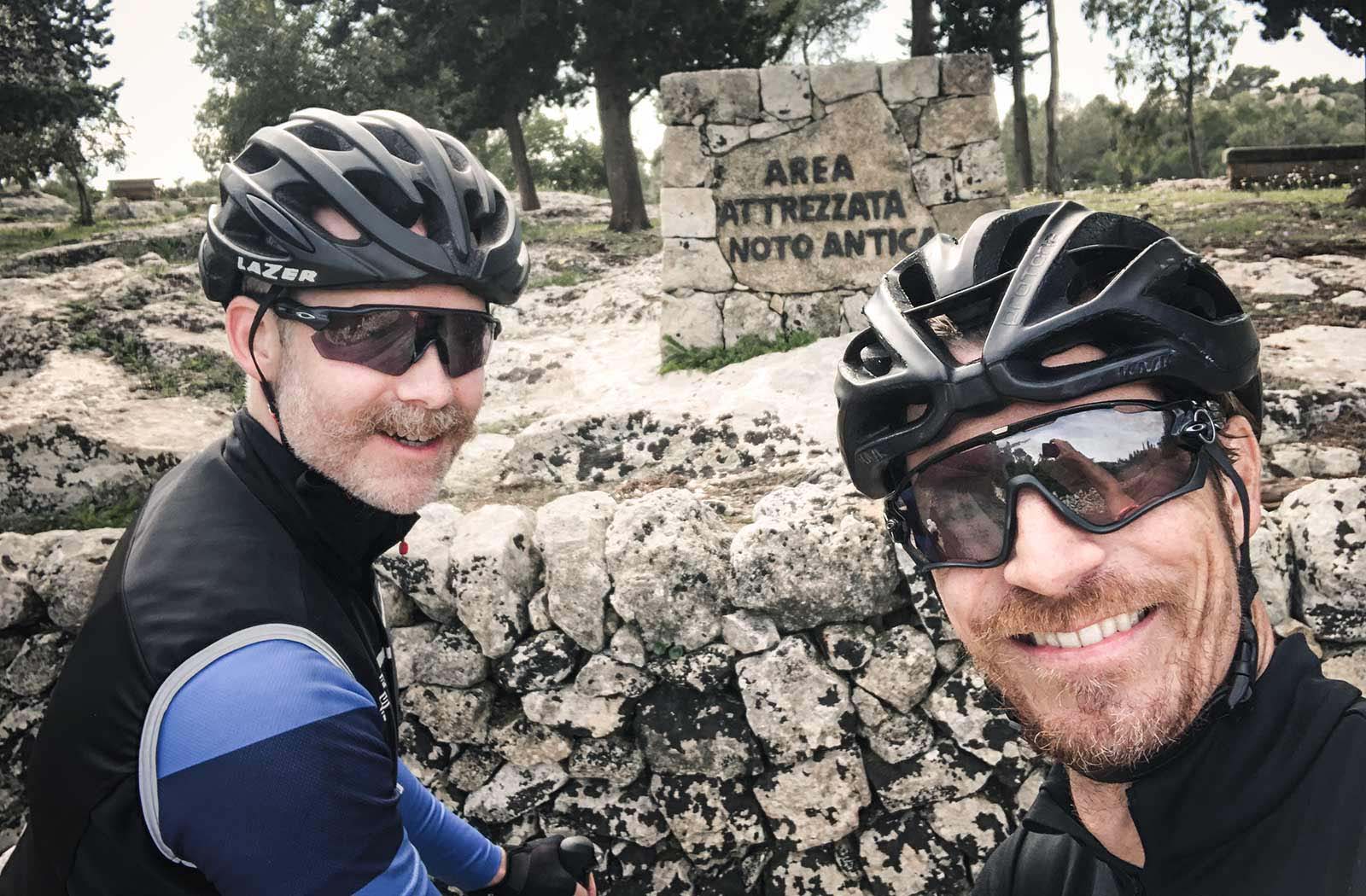 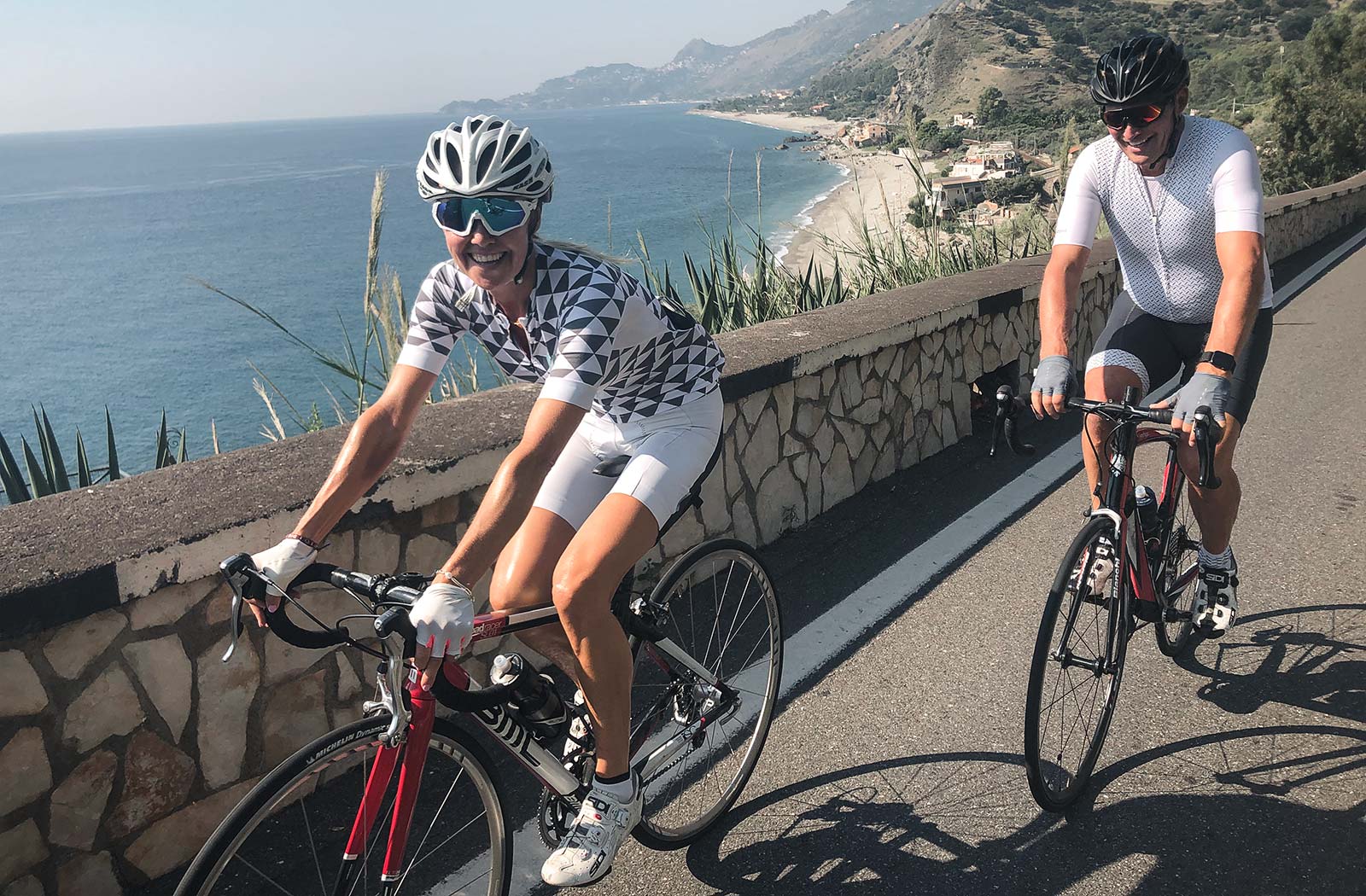 Travel insurance is not included.

Sicily is an amazing place to ride you bike and depending on where you choose to stay there is many different options for bike routes. Our base is in Catania so we have carefully chosen the areas that we think is the best for cycling and reachable from the east coast area.

The mountain chain called the Peloritani, that surrounds Messina, and runs all the way to the Alcantara river in the south offers beautiful scenery and a ridge from which two seas may be seen. The highest peak in this range is Montagna Grande at 1,374 m

The Peloritani mountains boast enchanting small villages, rich in history, traditions and cultures. The area is giftet with  outstanding panorama that includes Etna, the Aeolian islands and the Strait of Messina.

You will experience Taormina and other small towns like Savoca where you will see and experience some of the most famous Godfather locations. You will also ride the secret roads that was made by the allied during Second World War. These roads takes you deep into the mountains of Peloritani a truly unique bike experience.

Check out the coastal ride

Is the biggest mountain range on the island that runs along the north east of Sicily. Together with the Madonie and the Peloritani, they form the Sicilian Apennines.

This is the most untouched part of the Island. Quite why Nebrodi does not attract many tourists is a mystery to anyone who has been there.

Several of the peaks are above 1500 meters with the highest being the Monte Soro (1,847 m) and the Serra del Re (1,754 m) it is also home to a pluraty of animals among them wild horses and the famous wild black Nebrodi pig. Both can sometimes be seen from the road.

Besides fantastic mountain roads and scenic views Nebrodi also Highlights old historic towns like Troina and Nicosia and sevetal smaller villages such as Floresta or Montalbano to name a few.

The unique Nebrodian appeal is its complete departure from any common stereotype of “Mediterranean” landscapes and the visitor’s consequent realisation that much of Sicily looked this way when the first Phoenicians, Ausonians and Greeks arrived over two thousand years ago.

Ancient navigators considered it the highest point on Earth. Its name derives from a Greek word meaning ‘to burn’ but to the Arabs, it was Gibel Utlamat—the mountain of mountains -and the ancient Greek poet Pindar (518-438 b.C) described it as the column that supports the sky.

Certainly, it is the most monumental land-form in the Mediterranean, covering an area of 1570 km² with a 212km perimeter. On clear days the peak is visible over 155 miles (250 Km) away. It is around 10,900 feet (3,323 m) high and the crater has a diameter of about 20 miles (32 Km). Eruptions occur, often with staggering ferocity, about once every five to ten years.

6 DIFFERENT ROADS TO THE TOP

With 6 different roads to 2 different tops – South and North peak – Etna is a cycling climbers paradise. We ride the roads that wind up through the majestic lava fields to the top. If you are up for it we make a stop on the descent of Etna to have lunch and small winetasting at one of the best wineries on Etna.

Small mountains pop up on the flat part west of Catania that is part of the ‘Plain of Catania’. On many of these mountain summits you find beautiful small untouched Sicilian villages. Since the age of time this area has been growing oranges and still to this day is famous for its orange groves.

For cycling it is very interesting area because here comes almost no turist and the life in the village is like a time capsule where nothing has really changed in many years. climbing to one of these villages and have a coffee on the square is a magical break.

Hyblaeans is a mountain range in south-eastern Sicily. It straddles the provinces of Ragusa, Syracuse, and Catania. The highest peak of the range is Monte Lauro, at 986 m.

The name derives from the Siculi king Hyblon, who gave a portion of his territory to Greek colonists to build the town of Megara Hyblaea. Near today’s city of Augusta.

The Hyblaean Mountains are characterized by gentle slopes, interrupted by sharp valleys. Its peaks are not as high as other mountain ranges in Sicily. But what it lags in height it has in beauty. The area is famous for the most important historic Baroq towns of Sicily.

Noto is one of these baroque towns that are truly representative of 18th-century Sicilian architecture and art. But there is also an older Noto hidden in the mountains – Noto Antica. This was the original town of Noto that was destroyed by and devastating earthquake in 1693. After that it was abandoned and a new Noto was build where the town lies today.

We take you along the old routes to the great ruins of Noto Antica. We also ride through the incredible Baroc main streets of Noto and stop for lunch in one of the best lunch restaurants.