Another day at the Giro d’Italia in Sicily. This time the start in Catania. After driving my son to school I went straight to Catania in the morning. I had already thought of a plan for shooting a great photo of the Giro d’Italia in Catania. I wanted to find a Balcony pointing to Via Etnea, the long historic road with all it’s Barok buildings, where the rides would start in front of the Duomo.

So from the morning I called one of my favorite hotels in Catania – UNA Esperienze. The same hotel I stayed when I meet my Sicilian girlfriend. I told them a long story about my co-work with famous photographer James Startt from Velonews and that we had chosen they hotel for shooting these very important photos for Velonews.

My story obviously succeeded quite well because when I arrived to the hotel the staff had the key to the room with the biggest balcony ready for me. When James and I arrived to the Balcony to check out the view James was dissatisfied because Etna was covered in haze. I told James that he had to improvise because I unfortunately did not poses the power to remove the haze from the vulcano.

There was still time before the start so James wanted to shot some closeup of some of the riders bikes. So off he went to the start area while I stayed at the balcony.

Because I knew the hotel from the past I knew they had a fantastic rooftop terrace on 7. Floor. There was still time before the start so I went up there. Here is one of the best views of the town with Etna in the background. Now the idea matured that if I was fast I could shoot the first couple of pictures on the balcony on second floor and then run to the the rooftop terrace on 7. Floor to shoot the rides from there. But first I had to find out how long time it would take to run from the balcony to the rooftop terrace. Back on the balcony I started my stopwatch and sprinted up the stairs to 7. Floor to great amusement of the staff of the hotel. 1 minut was the time – it was possible!

Back on the balcony I saw to my horror that the clouds had covered Etna completely. Without Etna visible in the background the shoot from the rooftop terrace would be of no use So I decided to stay on the balcony and shoot all my pictures from there.

10 minuts before the start James arrived at the balcony. As expected he is grumpy about the clouds covering Etna.

Even without Etna we ended up with some very nice shots of the Giro d’Italia in Catania. The riders was on they way to Nebrodi and here after the north coast of Sicily and I was on my way to home. 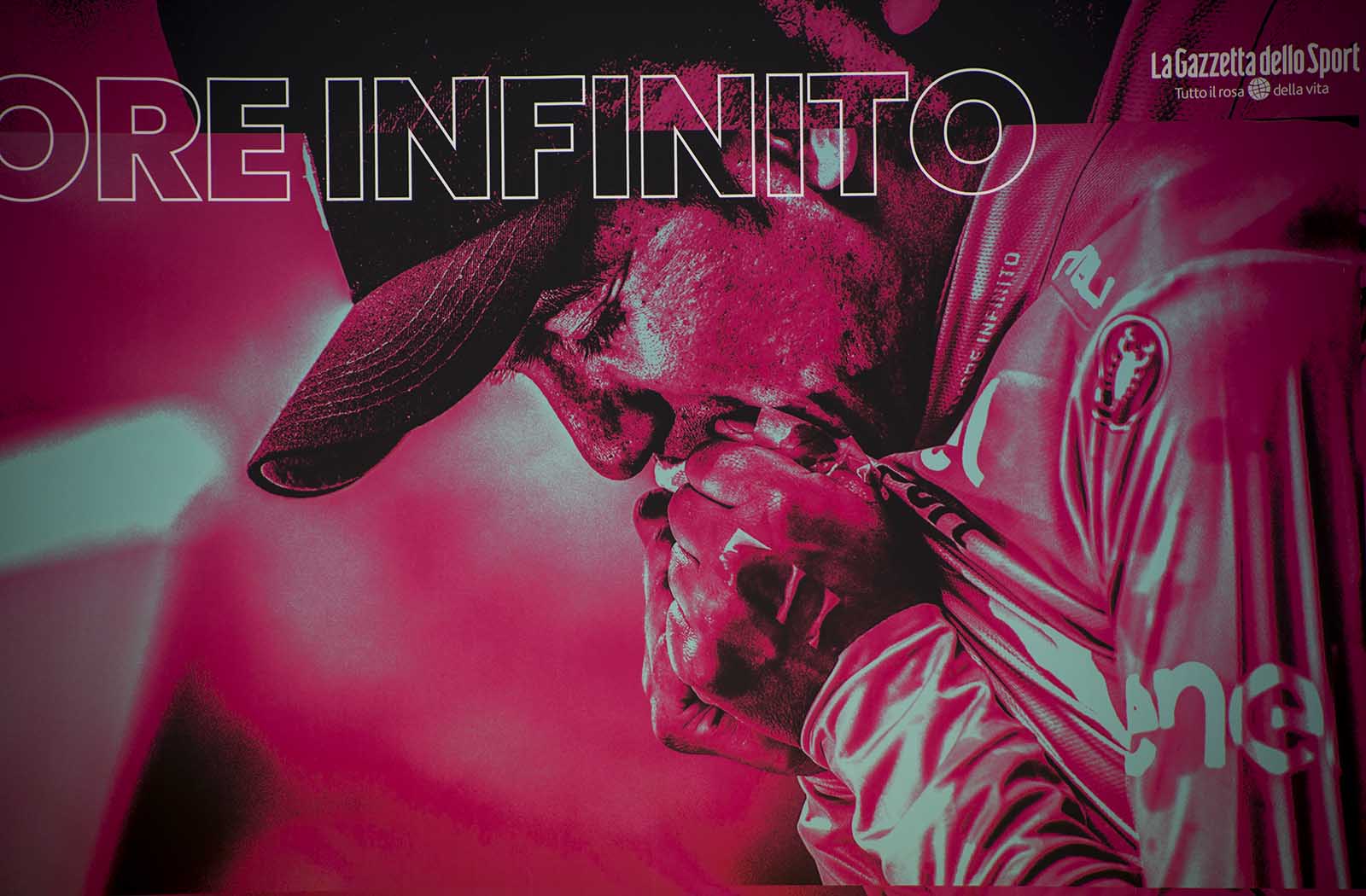 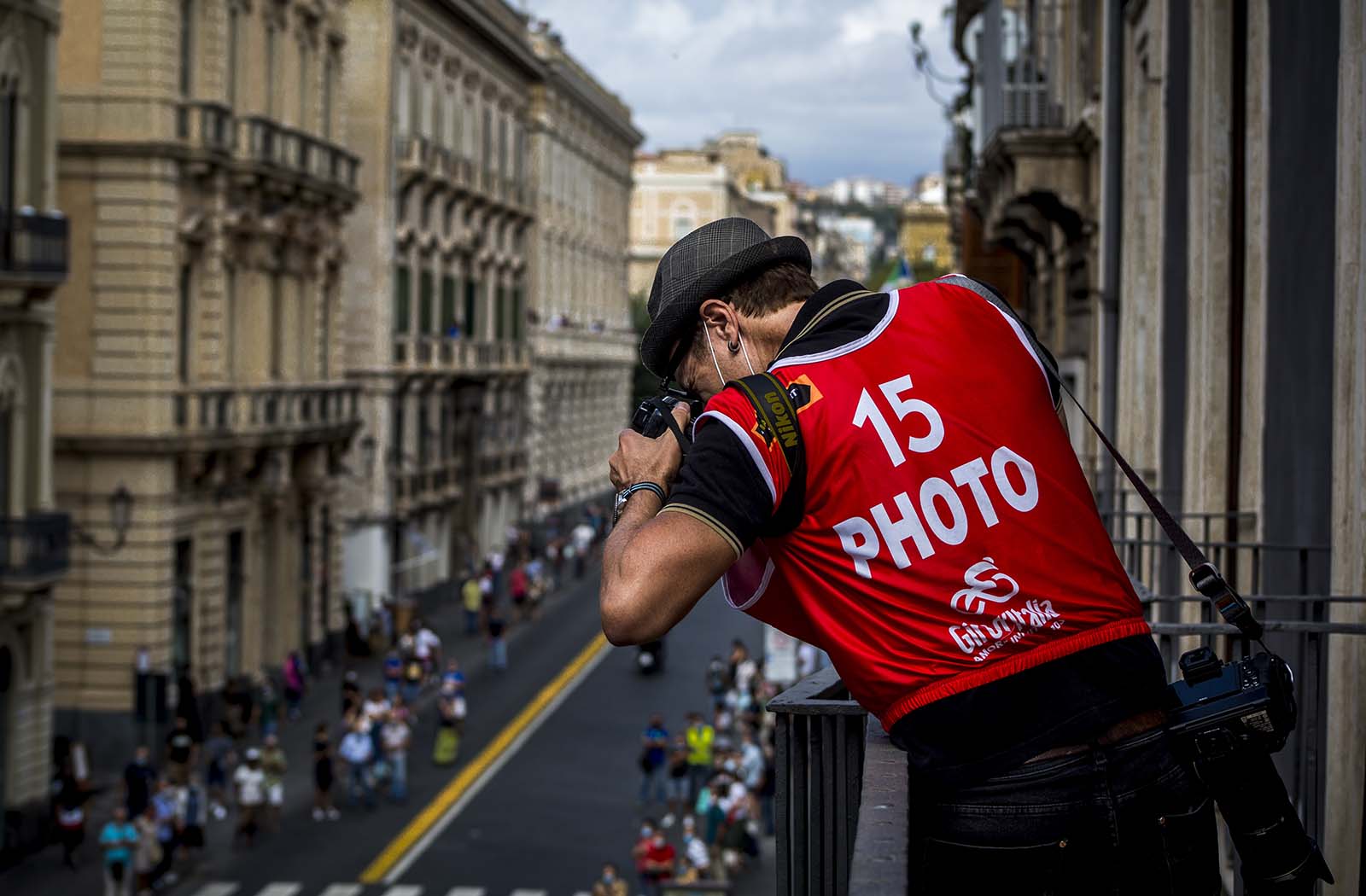 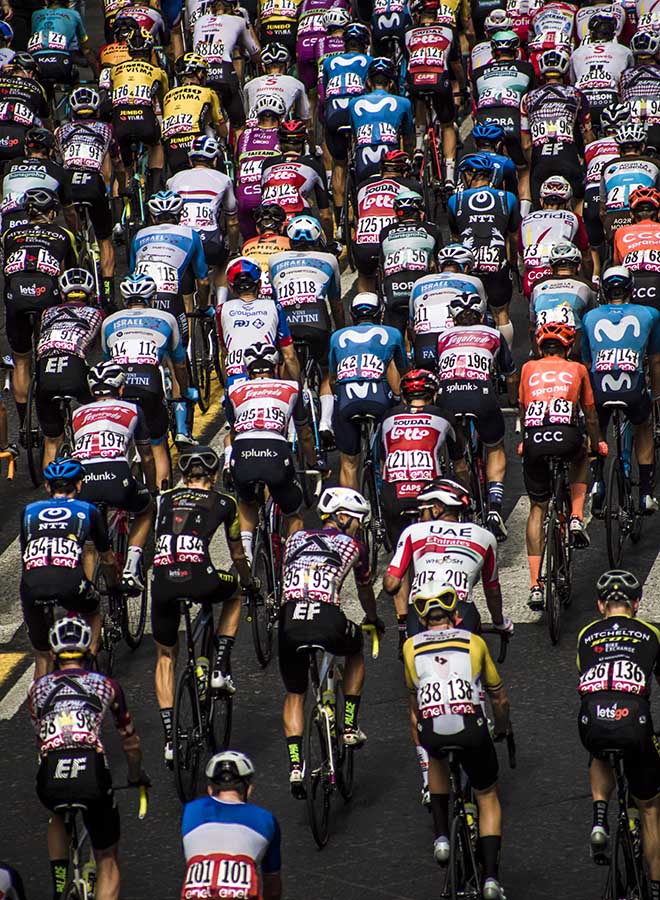 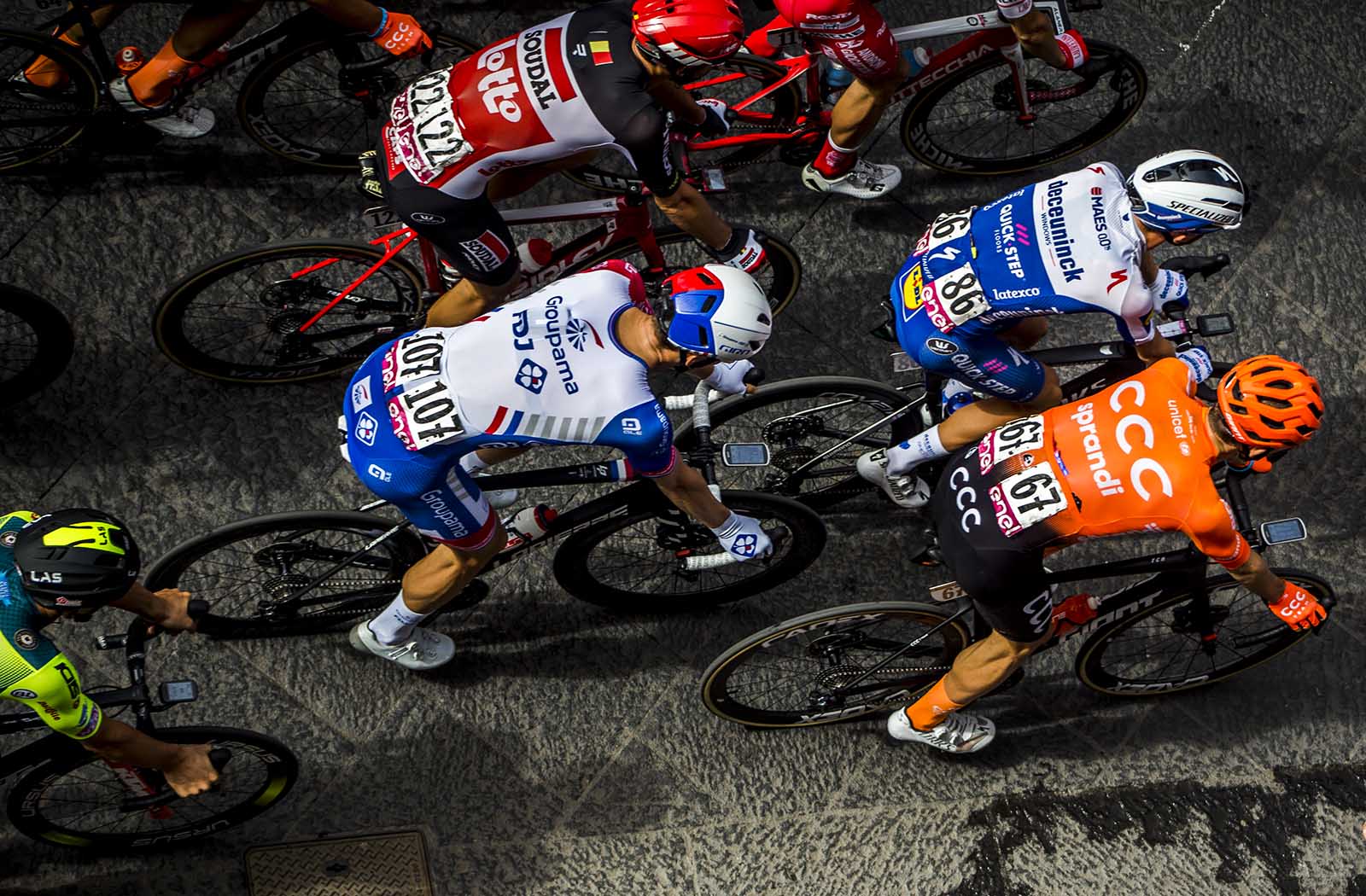 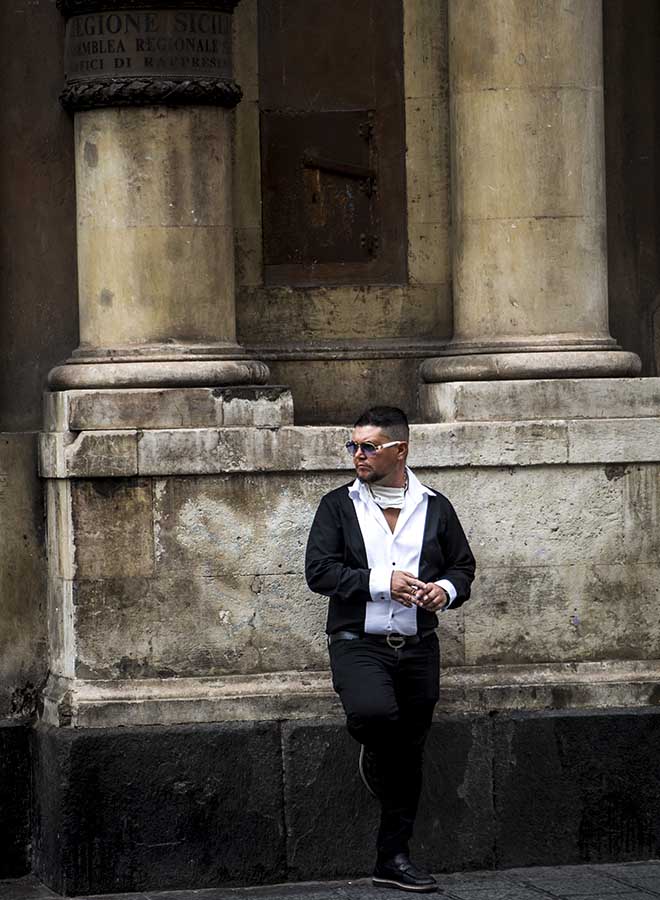 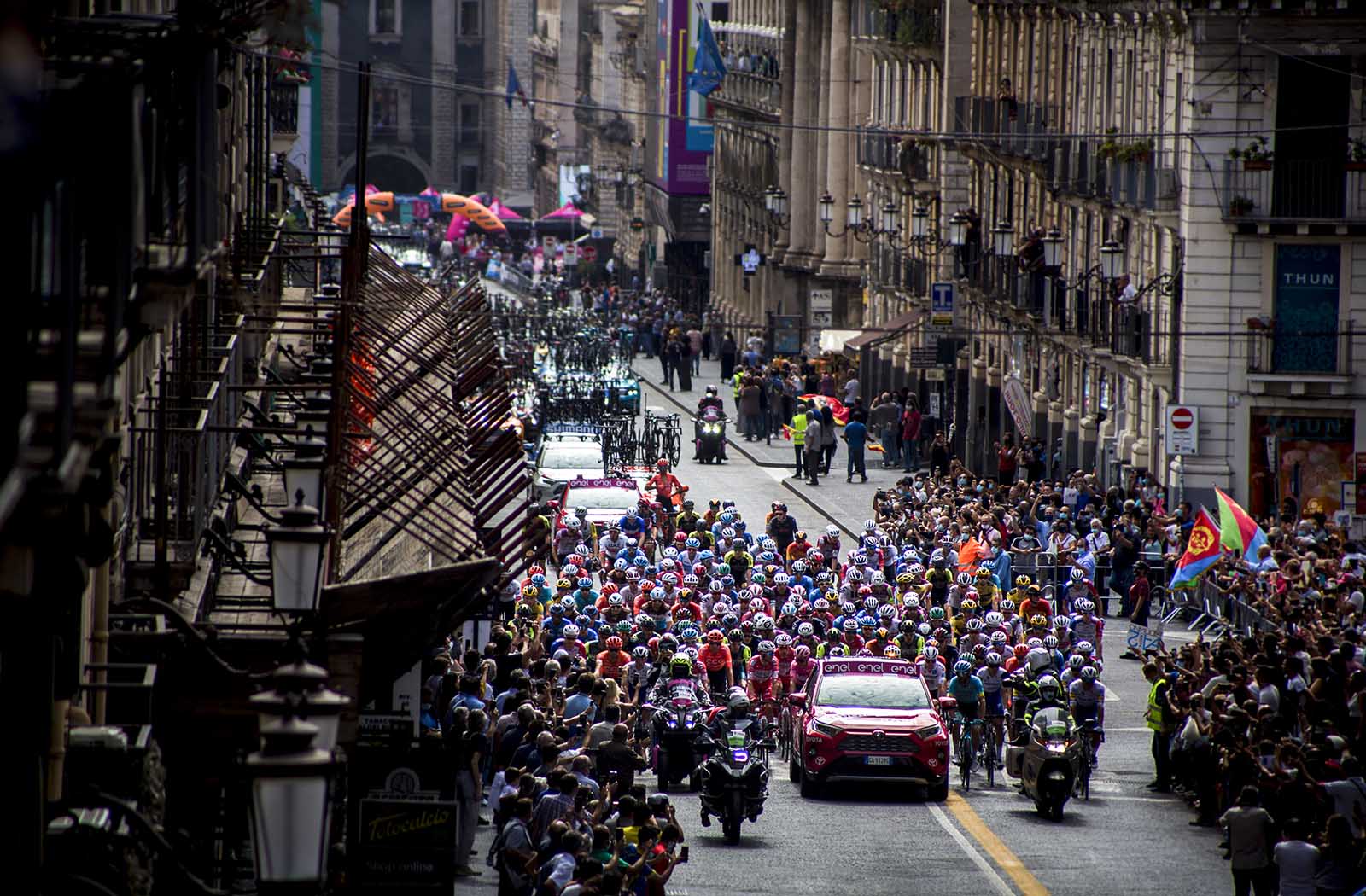 You can check out James Startt picture from that day here – can you see the difference from mine?