An incredible day started around 13 o’clock when I arrived at the first police road block in Milo – a smal town half way up on Etna. I had made an ingenious plan if I may say so. Two roads goes up to the finish of the Giro and my plan was to use the one where Giro would not ride. So because it would connect with the actual race route 4 km. From the finish line I thought this was a brilliant idea. There I was wrong!

Already 18 km. From the finish line, in Milo, I was stopped by the Italian police at a road block. I was sure I could sweet talk them I mean in Italy – especially the south – rules are only rules until you have charmed you way with the police. I was so wrong – No sweet talk worked this time.

The day before I had made an agreement with a photographer from Velonews, James Startt, that we should meet at the 4 km. mark where the other road connected with the race route. My job was to help him find the right spot for shooting some great photos of the race because I know Etna like the inside of my pocket.

Now standing here on the wrong side of the Carabineri road block my appointment with James and the my opportunity to see the stage live on Etna in jeopardy. Super stressed I got hold of James on the phone and told him about the seriousness of the situation (smiley) I swung the the old Audi down the switchbacks of the mountain like an Italian – which means very fast in the direction of the highway further down. Well happily I did not meat any oncoming cars. Down at the highway in the direction of Messina my nervousness was reasonably high. Would it at all be possible reach the race route where I could meet with James. Well James had accreditation for the race so if I just could find a point to meet him would jump into his car an drive with him without any problems.

Luckily for me the road is not blocked at the first lower stretch. I park the car in somebody’s driveway and send my position to James. Like a knight on a white horse, he arrives at the roundabout 6 min. later in a black Fiat with Giro d’Italia on Etna stickers all over.

Sesame-Sesame-open-up – from here everything is plain simple. We drive directly through several road blocks while we are smiling politely and great the police officers. Now I am a part of the Giro d’Italia on Etna. It is damn pretty cool.

As we calmly arrive at the place that I have designated as the best place for photography, we run around in all the lava to make test shots. In the end we agree on a small hill of lava approx. 10 meter high, as a good spot. James places himself on this excellent spot, after which he directs me down to 3 km. the gate where I in the best bouncer style (though kindly) have to make sure that no one stands on a 50 meter wide stretch of the road so he can get a clean shot – rides and lava background, no spectators. From his exalted point he directs me like the conductor of a Wagner opera. As you might know it is not an easy task to clear a 50 meters stretch for spectators 3 km. From the finishline in a mountain stage in the Giro d’Italia! To my own surprise I actually succeeded by telling the audience how important and famous a photographer James is while pointing to him at his little lava hill.

Approx. 10 min. before the riders arrive, the rain starts purring down over Etna – a gift for the hardness and dramatic of the race and for me as a photographer!

There is something very special about the last 3-4 km. of this road to the finish line. It drains the energy totally out of you. I know it because this part almost kills me every time I ride it – like tearing you lungs apart. Happily the pro riders faces showed the same agony at this point. After all they are just humans performing at the highest level of there sports. Today Gerraint Thomas showed that he was human. After an early crash hitting a water bottle at high speed he lost 12 min. Later that night it was confirmed that he got a fracture on his pelvis. Extraordinary will to race and what a shame that he had to quit the race the next day.

Jakob Fuglsang and Vincenzo Nibali seem to be the strongest at this point in the race. For me it is a dream scenario if they become one and two on the podium in Milano. Jakob is danish like I and Nibali comes from Sicily that is my future home.

What a day for the Giro d’Italia on Etna – the memory and emotion will stay with me for a long time. 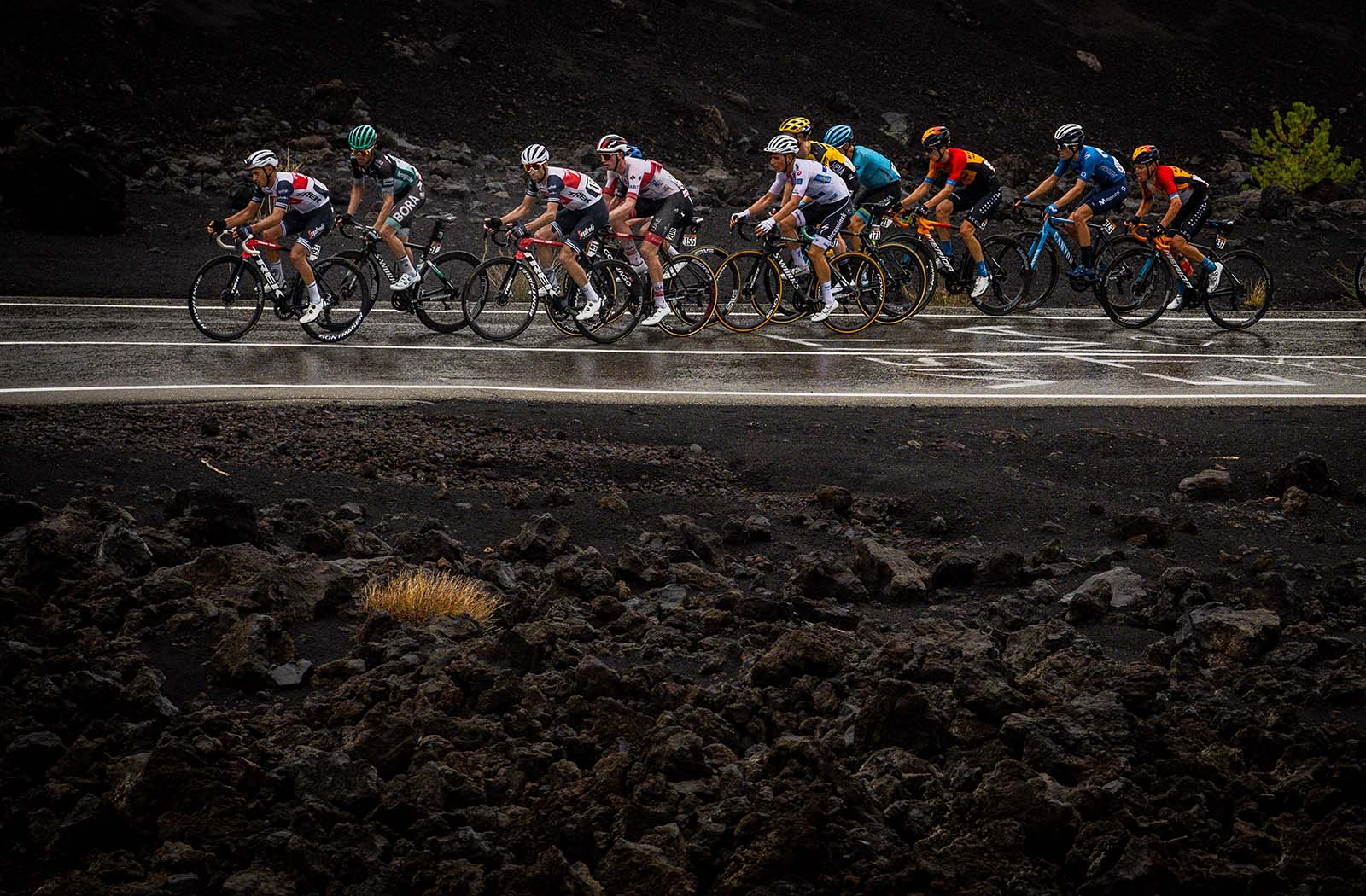 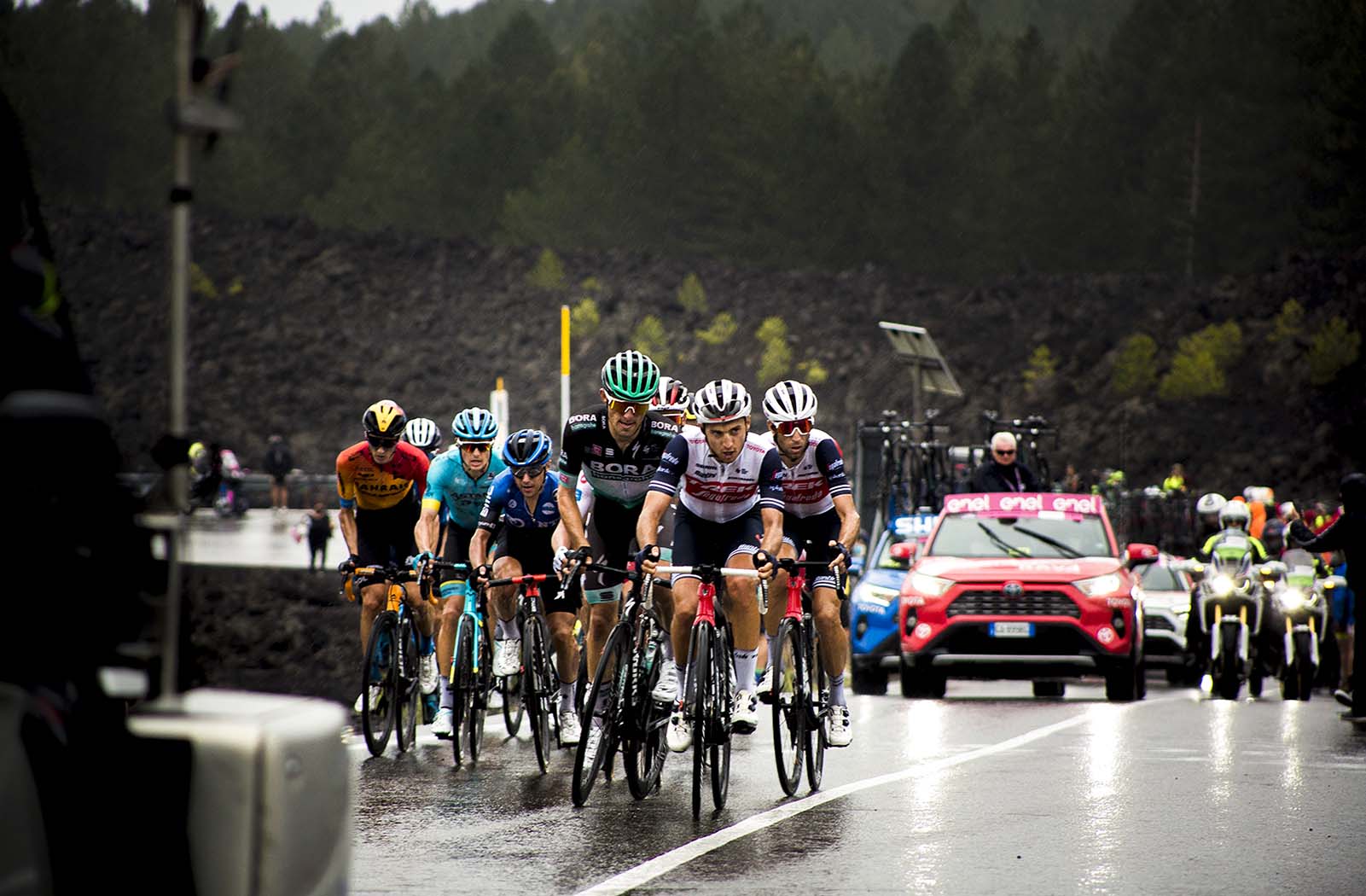 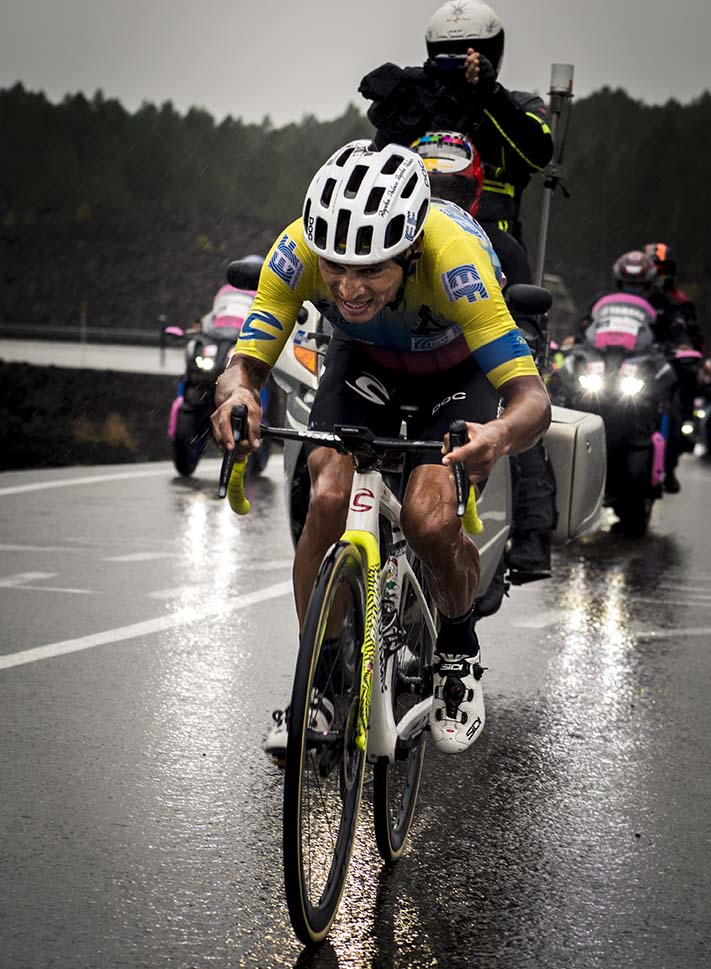 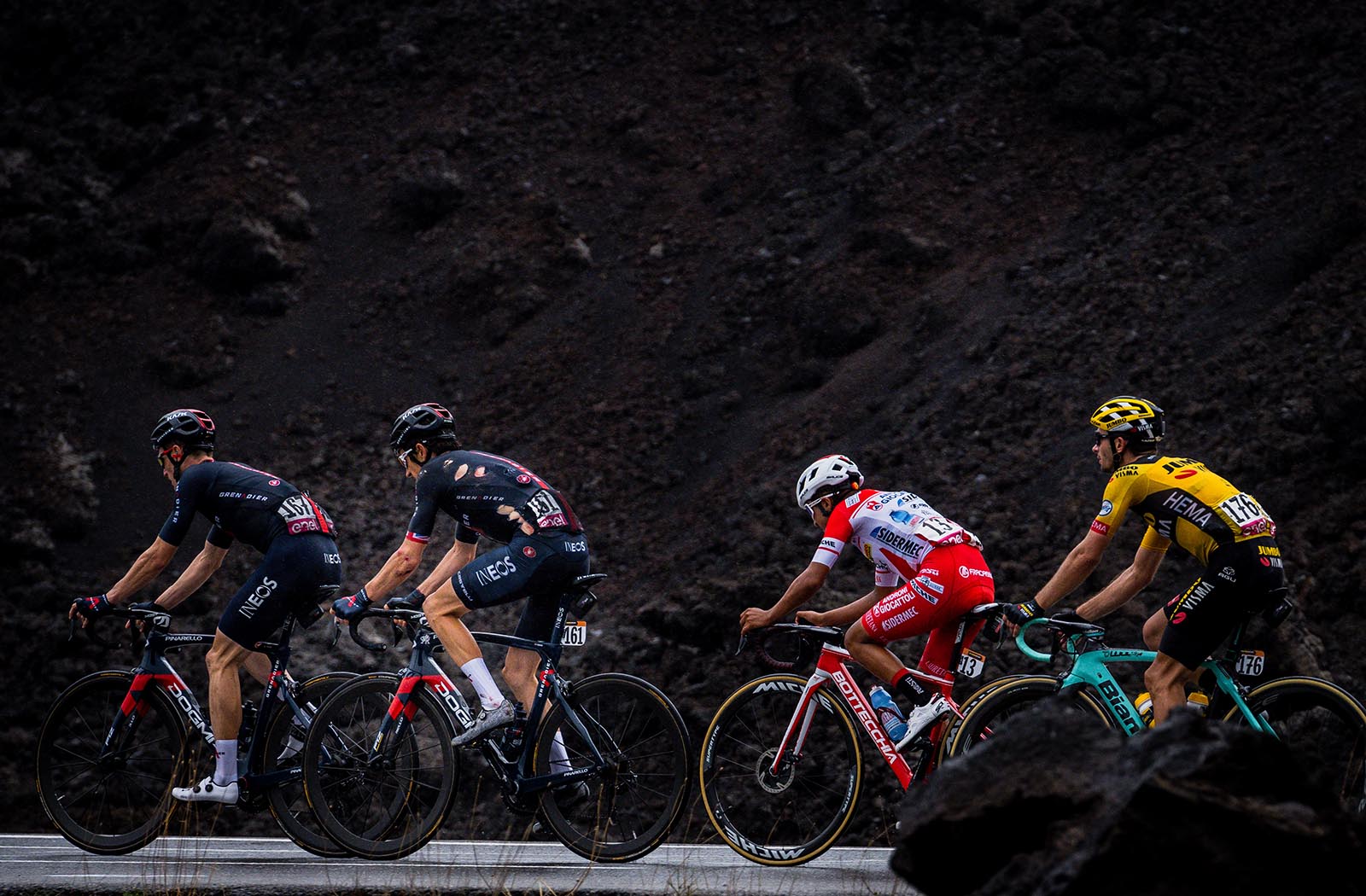 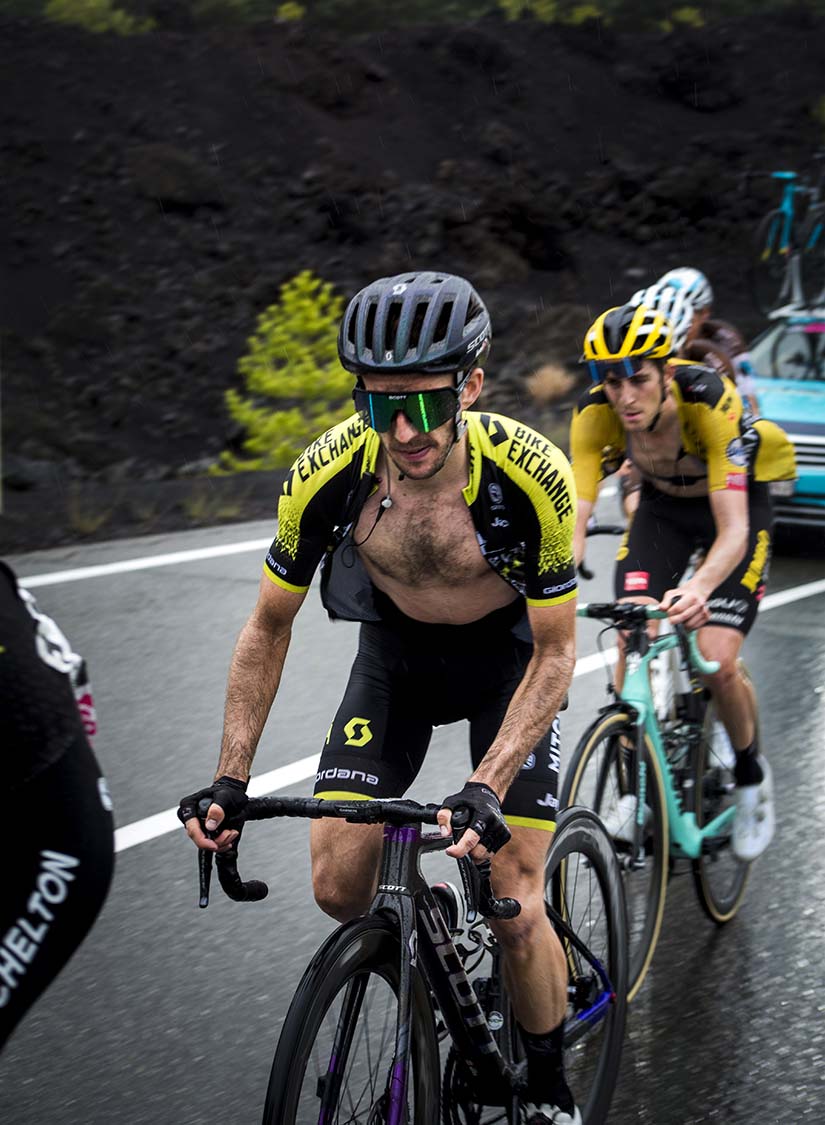 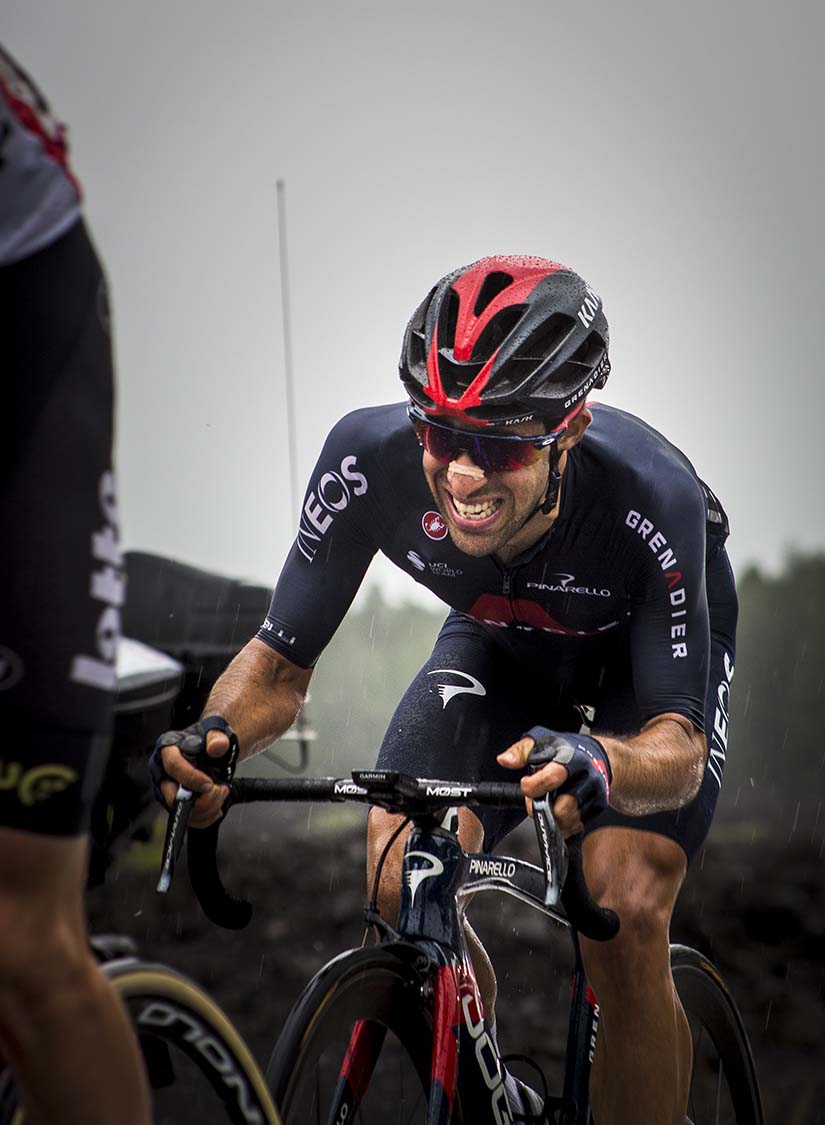 One reply to “GIRO D’ITALIA ON ETNA”